In conjunction with the exhibition, Phoenix Rising: Art and Civic Imagination, a series of films has been programmed on Saturday afternoons during January 2015. The programme includes Anne Maree Barry’s film Missing Green, filmed on Cork Street, Dublin 8. The artist, who is currently in residence at the Liaison of Independent Film Makers of Toronto , answered some questions from Exhibitions Curator, Logan Sisley, ahead of the screening of the film at The Hugh Lane on 31 January.

Missing Green (2013) is a poetic journey through Cork Street, Dublin. Narrated via interviews with former City Councillor John Gallagher, architect Gerry Cahill, author and journalist Frank McDonald and sociologist Aileen O’Gorman, the viewer discovers an area in Dublin that has gradually but dramatically transformed in the last 80 years. Utilising Situationist methodologies, Barry recreates a personal derive* through the character Girl. Girl’s journey provides a complimentary narrative by exploring the urban environment, paying attention to the smaller details, lost objects, signage, an allotment, increasing the viewer’s awareness of the urban landscape of which the narrators speak. This hybrid film creates a dialogue that reflects on a historic area in Dublin, whilst situated in the present.

* Literally “drift” in English; a playful journey through the city that increases awareness of the specific effects of the geographical environment. 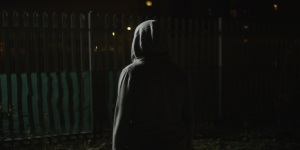 Where did your interest in the Cork Street area stem from?

My interest in the Cork street area began in 2006 after attending a meeting concerning the St. Luke’s Conservation Plan, organised by former Councillor John Gallagher (whose voice acts as one of the main narrative guides in Missing Green). Cork Street and The Coombe area, which were once thriving industrial areas, had become an example of what is called the ‘doughnut effect’. This describes the physical form that cities take on during the decline of their historic centre, with the development of the outer ring, leaving a hollow core at the centre. The doughnut effect can also be seen in full force in the acclaimed TV Series The Wire (2002-2008), with Baltimore the city centre that is in decline.

How did you select the participants?

It was a process of selecting people who understood this particular part of the city and how it worked – the architect, the sociologist, the author, the long term resident.

How did you approach the editing of the interviews? Were you aiming to make a particular argument?

I conducted extensive research into regeneration, social housing and architecture so therefore my concern was about finding a common thread within each interview. I also was interested in the Irish attitude to land and property ownership, what Dublin lost/gained with the rapid development of the Celtic Tiger Years. This topic is revealed in the difference between Cork Street ‘then and now’ and the ‘suburban ideal’ that Frank McDonald speaks about. Other themes that presented themselves were the street and the car. When I was editing the interviews what was most revealing was the manner in which Dublin was initially built – it is ‘a city of houses’ and as Gerry Cahill states that idea began to be disrespected. The historical Coombe area, which once was where the richest people in Dublin lived and had a thriving industrial area, subsequently became poor. It was then targeted to transport people back out to the suburbs – people living in the city centre were essentially forgotten about. Another city which suffered greatly from the decline of industry is Detroit, which is surrounded by a ring of wealthier suburbs – the classic example of the ‘doughnut’ effect. One of my intentions was also to reflect on the past whilst being in the present by utilising Girl’s journey as a guide. Girl’s journey references change and being lost, in some ways, within a city.

Why did you use the hybrid form combining the audio, which resembles a more conventional documentary, with the fictional narrative depicted visually?

I wrote the treatment for Missing Green in 2008 and always knew it would look and feel a certain way – the combination of a journey, a factual story and soundscape. The merging of these three elements – drama, documentary interviews and sound – however was no easy feat. I constantly questioned how they would sit together, what type of film I was making and more importantly how do I present this research in a cohesive short film? A structural influence was Dreams of A Life (2011, Carol Morley); it was essential to have finally found an example of the type of documentary re-enactment I was interested in. Last year an article stated that this current trend in films is called Creative Nonfiction – a term referring to true stories that use literary techniques in order to share a story in a different manner than conventional journalism. Similarly, writer Larry Rohan from The New York Times has said that documentaries are also at the point where they’re breaking from form and function, from straightforward journalism and into something diverse and wilder. Voice-over, music and narrative arcs based on real life are used in different and clever ways. Therefore to answer the question – it was an instinctual aesthetic choice however I think it is positive that the work now has a place within a genre.

Can you tell us about your residency in Toronto and how you find working in a city with which you are less familiar? Is the process different when your time in a place is limited?

The residency programme is with LIFT – Liaison of Independent Film Makers of Toronto – where I have been developing the project No Mean City. I had begun remote research before I went to Toronto however I discovered you cannot have a feel for a city – its problems, its success, how it operates – until you subsequently become familiar with it (I had never visited Toronto prior to the residency). Furthermore, in a city which I am less familiar, different problems arose – weather, how to navigate within my new role as producer and production manager and selecting interested interviewees to participate in my research. What was familiar was that I could utilise the learnt working methodology from Missing Green and adapt it to this current project. Additionally, I have found similarities between Missing Green and No Mean City, for example Frank McDonald speaks in Missing Green about the woonerf concept** and what that would mean for Dublin and the problem with traffic. A month before I arrived to Toronto the first woonerf was completed in the West Don Lands and similarly woonerf-like roads are appearing, one where I used to live at the west side of St. Lawrence Market. Toronto is a young city unlike Dublin. I’m quite honoured to be capturing and documenting a specific period of time in Toronto’s progression.

One thought on “Missing Green by Anne Maree Barry”